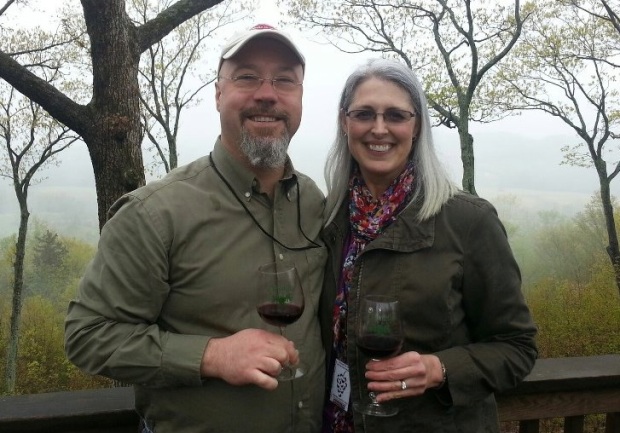 (Wayne and his beautiful wife, Cynthia)

What is hot sauce? When asked to describe it in one phrase, Wayne stated that it is “an added spice to life”. For him it’s a flavor enhancer. And let me tell you – this man lives by flavor. Everything he eats and drinks – even beer – has character. You can see it in the many food and drink posts on his Facebook account. He hates generic. He says he uses hot sauce to enhance the bland.

Wayne Van Sluys is no unknown in the ODTUG world. He is one of many unique individuals that, much like his hot sauce, adds character and flavor to the community. He shines in the BI world and is very popular at the annual KScope conference event. He recently celebrated his entry into the Oracle Ace program (congrats!). However, he has a secret (actually…he doesn’t keep it a secret – he just doesn’t always advertise it). He makes hot sauce. Gallons of it. Every. Year. He grows his own peppers in the family garden and when he’s done making all the salsas, jellies, and infused what-nots, he freezes the extra peppers. When he hits his pepper low in winter that’s when the magic happens. Hot sauce is made. 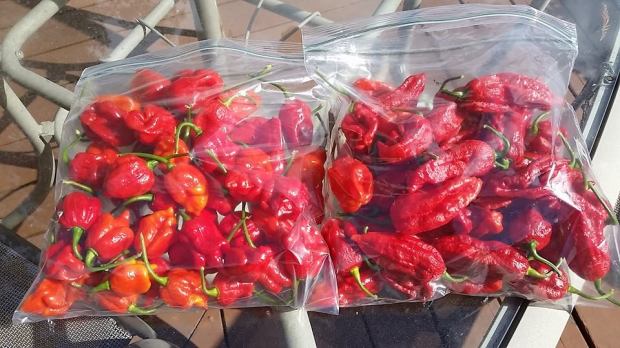 Wayne has been married to his better half, Cynthia, for more than 12 years. He’s stepfather to her awesome son, Clark. Luckily, Cynthia is a gardening enthusiast. It’s clear from the photos posted to Facebook that Cynthia has the green thumb. Wayne’s hot sauce can be partially credited to her skilled gardening habits. 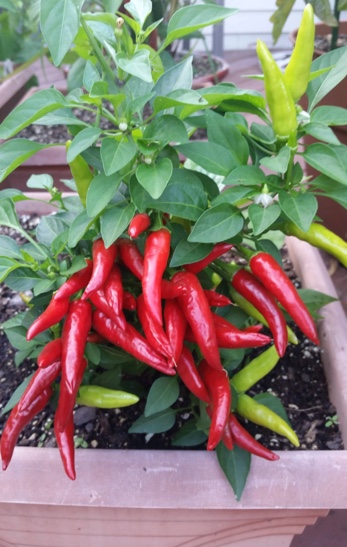 Wayne says that he first got involved with hot sauce on a complete lark. Around 2006 he and Cynthia were trying to grow a garden and they overpopulated the peppers. He liked peppers so why not? After making one too many salsa recipes, he decided to freeze the remaining 2 gallons of peppers until he could figure out what to do with them. Then he started to research hot sauce.

Store-bought hot sauce lacks flavor, he comments. Therefore, he started a journey to improve upon it. It also makes for great gifts, he adds. So each year he ends up making ~1 quart to ~1/2 gallon of hot sauce for himself and then gives away the rest. Family, friends, neighbors, and co-workers count themselves in the lucky Van Sluys Hot Sauce circle. He never sells it.

The process for making hot sauce is fairly easy, Wayne laughs. (So easy, in fact, that this may become a pet project of mine this fall.) He grows his own peppers either from seeds or seedlings. The regular peppers in his bunch consist of several varieties of jalapeños, serranos, and anaheims. Normally he grows 12-24 types of pepper plants (with several varieties of each), but he was limited this year by other time commitments and therefore settled on 5 types. When the peppers turn red, he picks them.

As his stash grows too large and he’s done making the usual fresh pepper dishes, he stores the overflow into freezer-safe bags and packs them into the freezer. During the pepper lull in early winter he then takes the peppers out and turns them into one gigantic batch of hot sauce. Sometimes he’ll break out part of the batch and make it extra hot by adding in some ghost or habañero peppers. That version he gifts to friends who prefer heat level: “mouth-on-fire”.

When used from the freezer, the peppers turn into a mush when they thaw. This actually makes them easier to convert into hot sauce, he comments. Sometimes he’ll need to prep the peppers by removing stems and some seeds. He’ll put the prepped peppers into a blender, mix with vinegar, and turn the blender on high until the sauce becomes “milk smooth”. Then he’ll let it sit for a while, breaking up any runaway big chunks. If the peppers are too large or the job is too hefty, he’ll switch over to a food processor. Then he cans the hot sauce through hot bath canning or pressure canning to give it a longer shelf life. 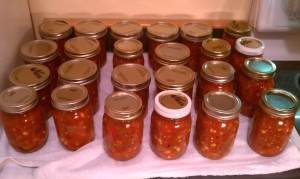 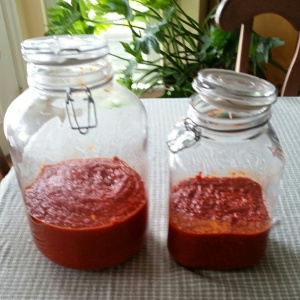 The process takes the better part of an afternoon. It generally yields 2-3 total gallons per year.

Since his original hot sauce revelation, Wayne has expanded his skills with peppers. He’s pickled them, infused them, made jellies and hot sauces, and has dehydrated them. This year he ventured into fermented hot sauces. His first experiment was with Sriracha!

Sriracha is something of an American past-time. Found commonly in Vietnamese pho restaurants and other asian cuisines, Sriracha is fast becoming a staple of the American food culture. An awesome, short documentary on Sriracha will teach you the basics – you can watch it free on Amazon Prime and Hulu.

Sriracha differs greatly from regular hot sauce in that it requires garlic and fermentation, Wayne mentions. He explains the process he experimented with this past winter: first, you mash the peppers with garlic and sugar. Then you let it ferment for 2 weeks. You have to stir the mash everyday and strain it well, so this takes a bit more work than regular hot sauce. You halt the fermentation process by mixing the mash with vinegar and salt. Then you pressure can it to increase the shelf life and protect against harmful bacteria.

The result is something beautiful and very unlike the rooster bottle sitting in my pantry. As you can see from the picture catalog I took below, it’s thicker and chunkier. In addition, it has only a subtle vinegar flavor, which I personally prefer. I LOVE it and the family members that visited my home for the July 4th holiday weekend also enjoyed it and ate greatly into our stash.

(Note: I nonchalantly mentioned to Wayne that my husband and I are now down to half a jar – as shown in the bottom-right picture. We are slightly panicked. He just laughed.)

Working with the Hottest Peppers in the World

As mentioned before, Wayne sometimes incorporates ghost peppers (the hottest pepper in the world) into his mix. He also uses habañeros from time to time. When working with insanely hot peppers, he recommends the following:

Hot sauce is a pretty common condiment in the United States. Below is a map of popular brands across the nation.

Hot sauce can be used to enhance the flavor of pretty much anything. Wayne’s personal favorite uses for hot sauce include adding it to:

In addition, he’s been known to get pretty creative with his peppers. Below is a picture of “Raspberry Habanero Infused Tequila”. Sounds delish! 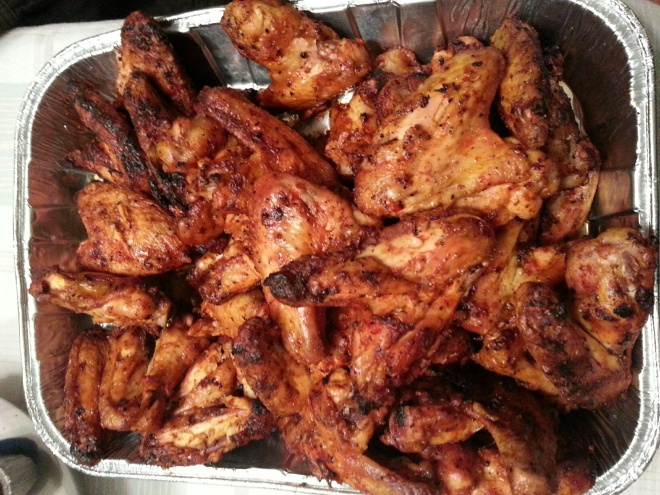 The Secret Sauce – Tips for Being Successful

If you’d like to venture into the homemade hot sauce world, Wayne offers these general tips:

Thank you, Wayne, for the fabulous foodie interview! Happy hot saucing, everyone! 🙂

3 thoughts on “ODTUG Member Series: A Man and his Hot Sauce”