Ah…the season is changing. Down here in Dallas, autumn has already descended upon our Lone Star State and the triple digit weather of summer has come to a halt. What’s that in the air? It’s the smell of fry…the tell tale sign that the Texas State Fair has opened for business.

Maybe you’ve heard the rumors about our great fair that runs from late September to mid-October each year. There are at least 3 things that Texans associate with this event: 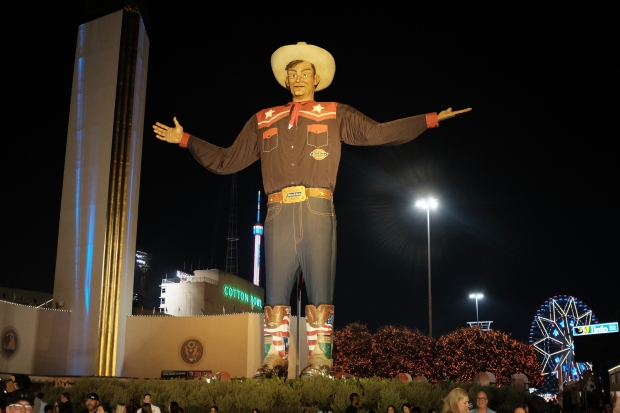 Big Tex is a 55-foot tall talking doll. He’s so large that he can be seen from afar. His boots are taller than people. I love him. Some people are scared of him. He’s an icon in both Dallas and the Texas State Fair and he welcomes everybody to the fair each year with his big booming voice set on replay regularly throughout the day.

If you ever look him up on wikipedia, you’ll read that Big Tex has been around since the 1950’s and you’ll see photos of the evolution of his look. In 2012 Dallasites were all shocked and saddened when an electrical fire ravaged his body and he had to be rebuilt. But he’s looking better than ever. 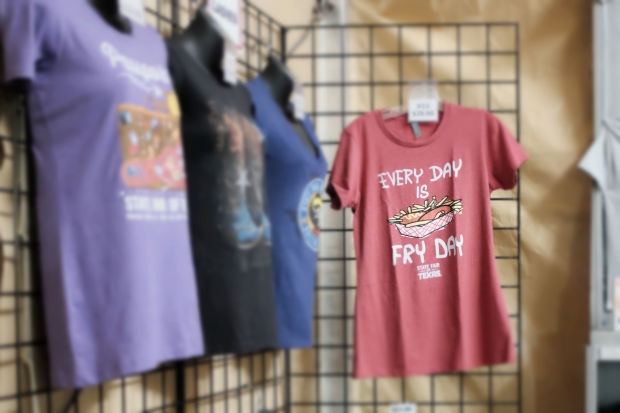 (some of the State Fair merchandise)

The Texas State Fair is really is the fried festival of the year. If you can think it and fry it, then you can probably sell it at the fair. And believe it or not, people will flock to you just to try your creation.

Although we’ve been living in Dallas for over 10 years, my husband and I started attending the fair just 5 short years ago. Frankly, we haven’t looked back since. We get excited to make the annual pilgrimage in hopes of taste testing one of the top new food entries. Each year, new menu items are entered into a contest. Anything that has promise makes it into the finals or top categories. If you can make it that far, you’ll get publicized all over the local media…which then draws big business. It’s as simple as that.

Take this year’s winners, for instance.

Just to give you an idea of how far down this rabbit hole goes, here’s the formal description behind the Smoky Bacon Margarita:

“An unconventional pairing of flavors adds a subtle smoky taste to a traditionally tangy drink. The Smoky Bacon Margarita takes the smokiness of freshly-cooked bacon and infuses it into a frozen lime margarita. With just a hint of smoke, this drink still captures the zesty citrus flavor of a traditional margarita. Finished off with a pinch of bacon crumbles on top, this thirst-quenching drink is served in a collectible souvenir cup for an added funky flair. Sip on this refreshing beverage and cool off from the Texas heat!”

Sounds interesting, right? Let’s try another one. How about a popular food item called bacon? They serve all sorts of bacon items at the fair (you really have no idea just how big this thing is): chicken fried bacon, bacon covered everything, and everything covered bacon. In the food court, they even have a place called Baconation! 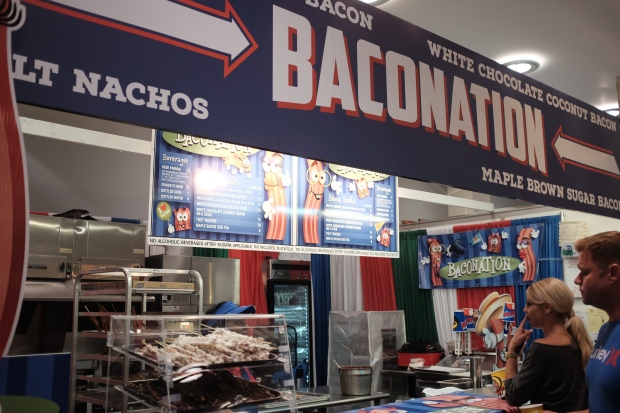 As you can see from the pic below, this is a place where you buy sweetened bacon among other interesting bacon-inspired creations – like white chocolate covered bacon. Don’t like it with white chocolate? Try it with milk chocolate! Don’t like it that way, either? How about bacon covered in maple syrup? They’ve got something for everyone! 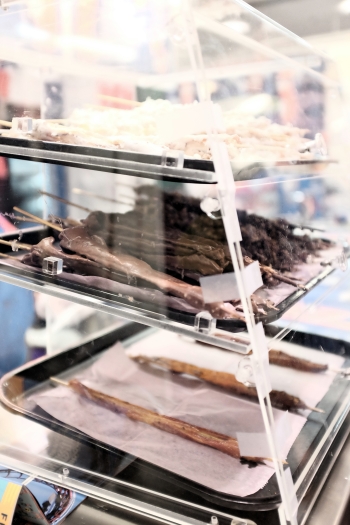 The food at the fair is nothing short of creative. If someone has already thought of it, it’s probably already been at the fair or will be arriving in the near future. This event is so wacky that famous foodies like Andrew Zimmern and a handful of others have recorded TV segments here.

So given the ~1,000’s of food menu options, how does one decide? (I’ll get back to you when I figure that one out). Given the fact that my appetite is pretty finite and that we’re there just long enough to eat and go…my current strategy is to stick to my favorites and then incorporate a couple of new additions. 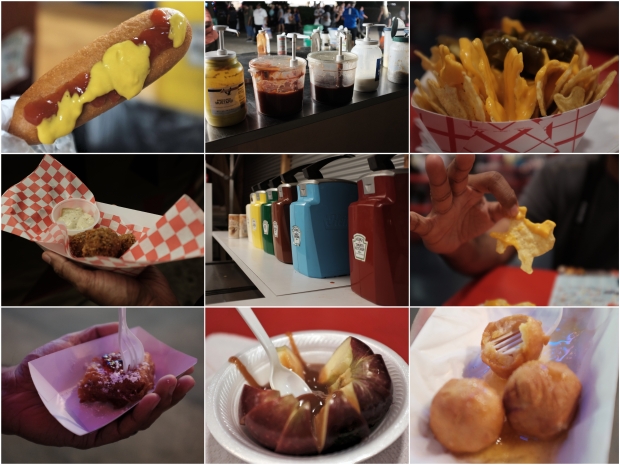 Above food items, from top to bottom, left to right:

Must have fair staples:

My personal must have fair staples:

My husband’s must have fair staples:

A Festive and Fun Time 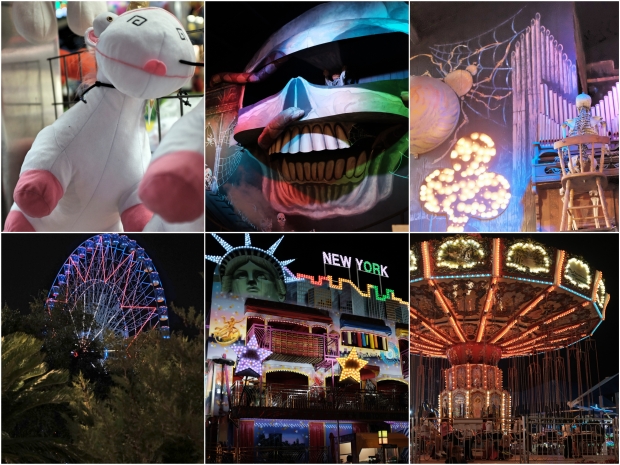 (some of the fun attractions – games and carnival rides)

The Texas State Fair is set-up like a carnival, car show, concert venue, college bowl, livestock show, craft fair, light show, ware demonstration, and an outdoor picnic all wrapped into one. It’s set in Fair Park – one of the largest outdoor venues in Dallas, so you can just imagine how much space there is. They used to host the Cotton Bowl here. 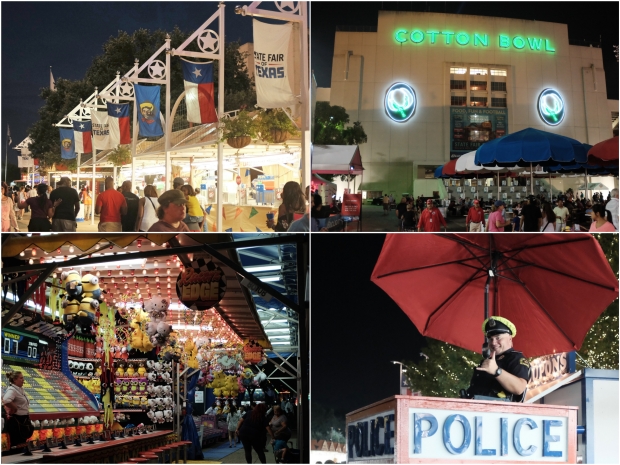 But, believe it or not – the Dallas population is bigger. The crowds for the past few years have really gotten out of hand. People have been so densely packed that you can’t move too far without having to touch another body. On popular days (weekends), it takes awhile to navigate the crowd. Lines going into the fair take at least 20-30 minutes and coupon lines are a quarter mile long all over the venue. And, it’s usually super hot since Texas is just coming off summer when the fair starts. This year, Hubby and I decided to go on a weeknight to avoid the rush (and sun). Perfect. 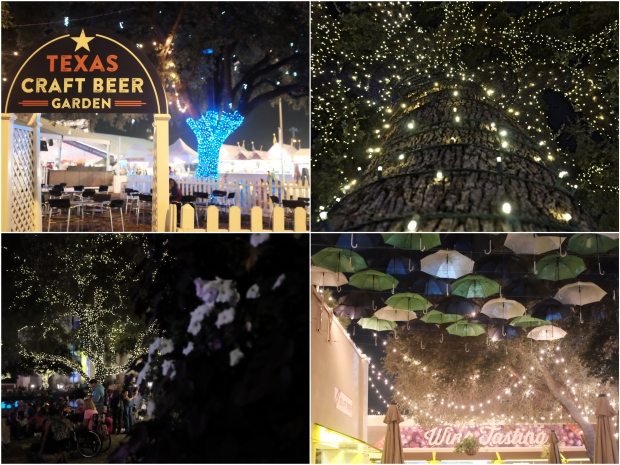 They do serve alcohol at the fair, which adds an interesting element to the people watching. Due to the number of policemen and security officers on staff, I haven’t seen it ever get out of hand. They’ve got this figured out. 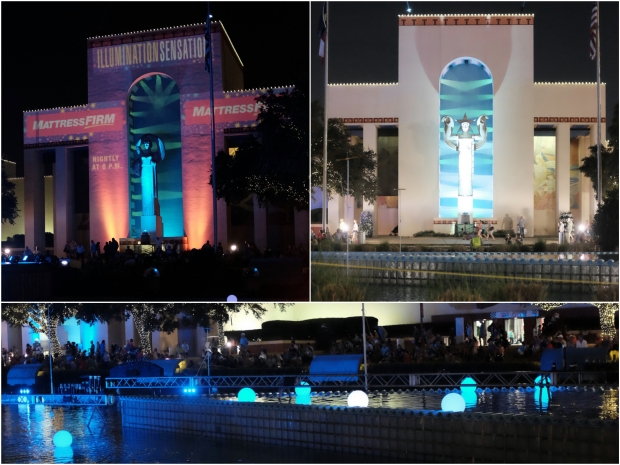 The fair runs every night for 3-4 weeks. They show fireworks, a light show, and they have a small parade that runs through the entire fairgrounds. The light show steps itself up each year and is worth watching. It usually involves lasers, motivational music, and video. 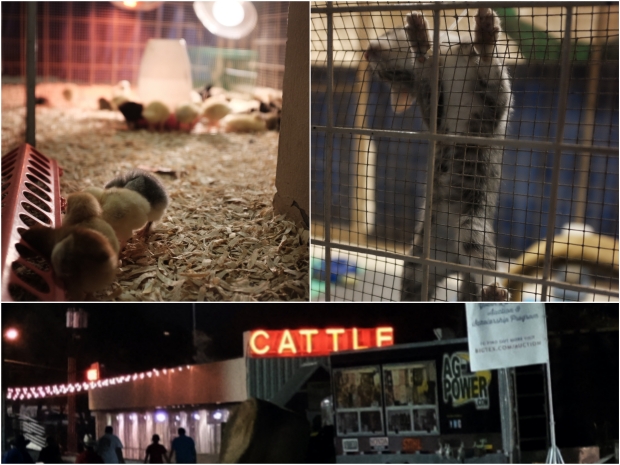 Of course there are animals – this is Texas. Pigs and costumed dachshunds race. There are cattle, horses, and other barnyard animals on display in pens, and they have a spread of baby animals and random birds. Kids can pet a number of the animals and learn firsthand how they’re cared for. The fair is set-up to appeal to all ages. 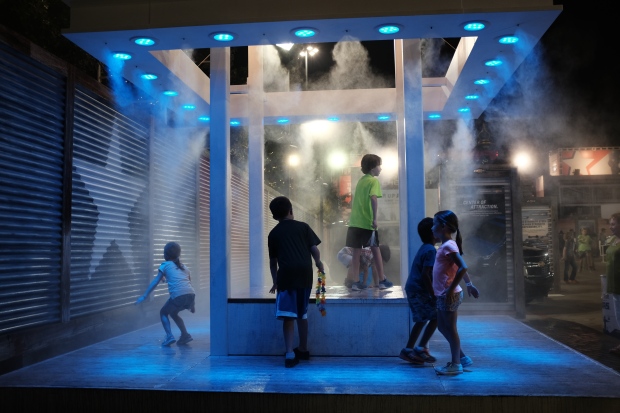 (one of the many popular kid play areas – misters!)

Over the years, the fair has gotten more expensive. Case in point, my husband and I decided to attend on “Thrifty Thursday” this year, a new concept for the event. A 20 ounce empty bottle of some form of Coca-Cola gets you in for $6 and a number of fair food items are discounted. Here is a breakdown of our costs this year – they have been 20-33% higher in previous years, since we didn’t have a Thrifty Thursday to take advantage of. 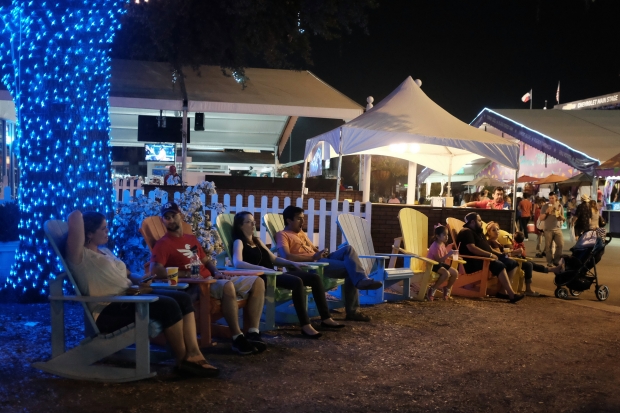 (some fair goers relaxing outside of the beer garden)

So how did the 2015 Texas State Fair fare? Not too bad. We’ll see you again next year, Big Tex!