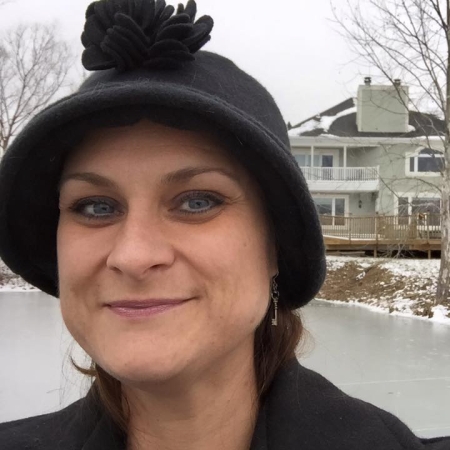 I was having dinner with a dear friend when I asked if she knew anyone in ODTUG who had cool hobbies that I could write about. As we were saying goodbye, she suddenly remembered something very interesting. “Elizabeth Ferrell and her husband built an experimental plane!”

Um…what? Like, a plane plane? Naturally, I did a double-take and asked her to repeat herself. My jaw dropped to the floor and then stayed there for a little while.

Really quickly I realized that, yes, we were talking about someone who made an actual, flying plane. It’s an experimental plane, mind you, and it seats only 4 people. But this thing flies in the sky! Like…with real people piloting it. I’ve never heard of such a thing. My mind started reeling as I thought about the possibilities. During my 30+ years of flying on commercial jets, the idea of building your own plane never once entered my mind.

Elizabeth is a fairly new entrant into the ODTUG world. She was introduced to our quirky little community through Tim Tow. I had the pleasure of working with her on the EPM/BI tracks for a couple of years. And at KScope15 we further bonded when we danced late into the night on the couches at Mansion.

Elizabeth is one of those quieter types. I would dare say that she’s a bit shy, but I’m sure she’d disagree. Until you really get to know her, you have no idea how awesome and brilliant she is. Take a look at some of the interesting facts about her:

What it Takes to Build an Experimental Plane

I’m just going to jump right to the meat of this story, which is the how? what? and who? part of it. How in the world does someone build a plane? Who does this? And why do they do it? Some of you pilots in the ODTUG world probably laugh as I continue to be astounded by these thoughts, but this seriously boggles my mind.

First of all, it was a two-person effort. She and her husband, Brett, spent nearly every weekend for the better part of 6 years on this project. They estimate that 3,500-4,000 total hours went into the initial build of Victor Fox. The plane kit manual estimates a minimum of 2,500 hours for build, but they ended up customizing a few things. In addition, it’s pretty clear from the interview that Elizabeth and Brett take their safety very seriously – I’m sure they were meticulous when building each component.

Elizabeth says that she was more heavily involved with the construction at the beginning of the project. As they came to the realization that someone had to fly the plane, they decided that she would switch over to getting trained as a pilot. For experimental planes, a pilot’s license with ratings (ratings = experience) is required. Because their experimental plane type is considered to be complex and high performance, extra ratings were necessary.

When one decides that they’re going to build a plane, the Ferrells believe there are several things one should do to ensure success:

Why One Would Build an Experimental Plane

They chose to build a Velocity XL. They chose this for a combination of reasons, but safety played an integral role in addition to the amazing build quality. This plane manufacturer’s website claims that the minimal cost to build this plane is $150K, which is far cheaper than buying one. Note that there are other “fun” airplanes that can fit 4 people, don’t require a hangar for storage, and only cost $40K-$60K.

(updated Victor Fox, looking as stellar as ever!)

What’s interesting about the buy vs. make argument is the stark differences in the planes. Airplanes have been certified since 1969, but there are basically only 2 commercial types available on the market for purchase. And these are both older models – generally from the 1960’s and 1970’s. Therefore, in order to build a plane with modern technology and equipment you have no choice but to build your own. The reason is because it costs millions of dollars to get a commercial plane certified…so plane manufacturers just stopped doing it. When you think about this, it really opens your mind to how many experimental airplanes must exist in the world, born to passionate fliers. Plane technology has come a long way since the 1970’s.

There are some unusual and super cool characteristics about the Ferrells and their hobby. First of all, 2-pilot families are pretty unusual. In addition, only 4% of pilots are female. Elizabeth commented on how shocked she is by how few women there are flying, in technology in general, and involved with STEM education (Science, Tech, Engineering, and Math).

Her personal love for planes came from her childhood – her godfather had a private plane and it opened her eyes to the skies. She always wanted a plane and knew that she would have one, one day. The idea of building the plane came from Brett. She recounted that decision process, stating “that was one of the scariest things – building something that could kill me.” After she realized how many inspections and tests were required, she no longer felt that it was dangerous and jumped right in.

You Have Your Plane…Now What?

After building a plane, it has to be test flown. If you decide to forego the risk and have someone else test fly your experimental plane, it costs a lot of money. So…Elizabeth did it. <— I know – it’s insanely awesome isn’t it?

Test flying includes crazy feats like dive bombing to the ground (a.k.a. “flutter” testing). Elizabeth says that you can only do 1 test hour at a time and 40 hours are required, so this is a slow and exhausting process.

(after flying Victor Fox to AirVenture for the first time – what a rush!)

Since then, the Ferrell life has been consumed with their plane. “It’s an all-encompassing hobby,” she stated. “You have to know everything inside-out.” Since the Velocity XL is a show plane, they frequent air shows. If they’re not flying, they’re performing maintenance or going through the plane’s systems to make sure that it’s ready for flight. There’s a rule of thumb that this type of plane requires maintenance after every 3 hours of flight. After every 50 hours an oil change is required. They made an agreement in advance that they couldn’t have any other hobby. Even their vacations center around where they’ll take Victor Fox.

(One of Elizabeth’s favorite things: N44VF and Oracle Hyperion! What a birthday!)

Brett has a YouTube site where he posts their flight videos. I was watching one that seemed a bit scary – they had to divert to another airport due to a rough running engine. I asked her about other emergency situations that she’s encountered. In Sept 2008, Elizabeth had to make an emergency landing on a road in Indiana. The plane’s oil pressure had dropped to zero due to a small burst and they had witnessed a puff of smoke. She also saw a bunch of oil running on the floor. She went into glide mode to avoid damaging or causing the engine to seize and then decided to touch down on a nearby road. Eventually, they found a driveway that she pulled into. They called the FAA to file an incident and get the plane towed.

When she recounted this harrowing tale, she laughed. She felt sorry for the poor guy driving on the road that she had landed in front of. Based on the comments from this incident online, it was clear that her experience, training, quick thinking, and the plane’s safety features yielded a successful emergency landing.

Cool, I’d Like to Build My Own Plane Please!

If, after reading all of this, you’re like “I’m totally doing that!”, Elizabeth offers the following advice:

So what’s up next for Victor Fox? Elizabeth thinks on it a moment. “We just want to keep taking it new places.”

The Ferrells have hit all of their big milestones already (a great accomplishment considering that they have already built an operational plane!). Now they’re looking for more interesting places to fly. Some thoughts: hitting up every state park that has a runway, flying to Niagara, and flying to the Bahamas.

One thought on “ODTUG Member Series: The Plane Maker”