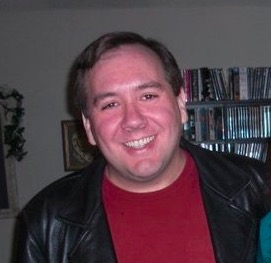 As I write this, Scot is at the last day of the annual BGGCon event. I’m completely jealous. I have yet to attend myself, but hearing him wax poetic about the convention and seeing his Facebook pictures make me realize that I need to plan around this event in a year’s time.

BGGCon (Board Game Geek Convention) is a local, annual board game event that now lasts 4 glorious days. It takes place each November and people from Texas (and all over) flock to it to partake in a weekend of fun and to geek out on all things gaming. It’s one of two annual gaming conventions that he makes it a point to attend.

The people who attend this type of convention call themselves “gamers”. And gamers. Are. Awesome. 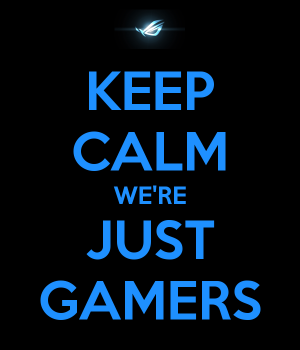 I’ve known Scot for just over a year. We’re both part of the organizing committee for the NTxHUG (the North Texas Hyperion User Group). In North Texas, most of us EPM folk run in the same circles. Scot also likes to attend and present at KScope.

Gamers are everywhere. Like Scot, I too enjoy gaming and it has been a passion of mine (and my husband’s) for years. Gaming has evolved and expanded over time and the beauty of today’s gamer world is that it encourages people of all races, genders, and ages to participate. If you ever have the privilege of attending a convention take a look around. You’ll see a whole lot of everybody there.

Don’t believe me? Take a look at the below 2015 infographic from the Entertainment Software Association (ESA), which shows some pretty cool statistics about one of the largest gaming groups: video gamers.

There have been multiple studies purporting the effective skills built up by gaming, both mental and physical. The ESA researches the effects of video gaming on humans and each year they publish an annual report. This report comes to the conclusion that gaming is good for you.

What is a Gamer?

The term “gamer” is pretty broad and describes a whole world of subcultures. In preparation for this article, I attempted to research if there were official classifications of gamers…but came up short.

So what is a gamer? After searching high and low, Wikipedia offers a great umbrella definition:

Although the term “gamer” may commonly refer to video game players, the term may also be applied to players of other forms of games, such as tabletop games or physical games. Additionally, in some countries such as the United Kingdom, the term “gaming” refers to legalized gambling.

–> Just to be clear, we’re not talking about legalized gambling in this article. 🙂

There are many different types of gamers in the world. “Gamer” is a high-level term for folks who like to play any of the following genres of games:

The above is by no means a formal classification, nor a comprehensive list. I’m quite certain that are more categories out there (take a look at this classification list, for instance). In addition, there are subclassifications within each of those groups.

Scot’s interest in gaming started young. He played games with his mother when he was just a boy. He started with simple games like Checkers, and then graduated to more advanced games like Chess and board games. As he got older, he and his friends tried Dungeons & Dragons and strategy tabletop games like Risk, Axis & Allies, and Shogun. In college he was exposed to Magic: The Gathering and it has stuck ever since. Settlers of Catan was his gateway game into Eurogames (German and Euro-style tabletop games). Now as an adult with his own family, he finds himself playing more Eurogames and party games than anything else. 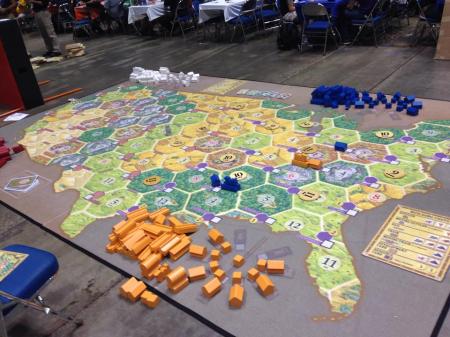 Just to be clear, Scot’s interest is way beyond the typical, average gamer – he’s not someone who occasionally plays Poker. He considers this hobby to be his obsession. He says that his “mind tends to wander towards games all of the time.” If he’s not directly engaged in a tabletop game with his friends, he’s on a regular Fantasy Sports league, attending an annual gaming convention, or collecting games or game pieces. He says he tries to play games with his friends on a weekly basis. Over the years he’s amassed a game collection that hovers between 50-100 games total.

The Awesomeness that is GenCon

GenCon is the 2nd annual gaming convention that Scot attends. It’s held in August in Indianapolis, IN. It also lasts 4 days but attracts over 60,000 attendees. It’s where people who love all things gaming go to game out. GenCon is home to a variety of gamers and includes events and vendors for video, card, and party gamers. Plenty of folks even come dressed as their favorite characters. They also have True Dungeon (a life-sized dungeon with interaction), giant animatronics, and puzzles that require that you work in teams. The convention space includes an open gaming area equipped with a full library that people can borrow from. All-night Werewolf games are run for the willing. The Dealer’s Hall contains a large convention floor with hundreds of booths where you can test out and buy old and new games. Famous gaming companies attend to demo their up and coming games. There are tournaments and prizes galore. This event is the highlight of Scot’s gaming obsession each year. 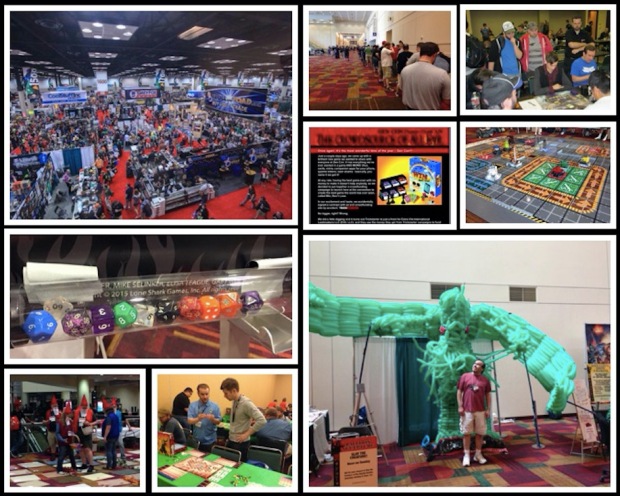 Scot’s first exposure to GenCon was quite unique. Back in 2007, Wizards of the Coast (one of America’s largest game publishers) tried to start a new social platform for gamers called Gleemax. They ran an Ultimate Gamer Contest to find one lucky “everyman” gamer to put on their advisory board. In order to make it to the group of finalists, contestants were put through the ringer:

Scot made it to the top 5 and all of these finalists won a ticket to GenCon. This first experience at GenCon blew Scot away.

Scot and a guy named Evan became the co-winners. They won some money, became Board members, flew out to Wizards of the Coast, and got a secret peek into what the team was developing next. Unfortunately, “after that, the whole project fell apart and never produced anything else, but I loved GenCon so much that first year that I’ve kept going back every year thereafter.”

Yes, Scot partakes in the annual KScope Werewolf game. In a nutshell, this is a party game where you’re either on the side of the villagers, the werewolves, or some unique character in-between. There are no boards, dice, or figurines. Everyone has one card that tells them their role and the rest is left up to moderation and deliberation. Villagers are trying to snuff out and kill the werewolves and vice versa. It’s an interesting game that people with any skill level can play. Bonus points if you can deceive people easily and/or you can read people well. It’s highly addictive (for instance, my family plays late into the night at every holiday gathering), quick, easy to learn, and the best part of the game is recounting each person’s internal dialogue after each round.

The KScope Werewolf event made its appearance at the Monterey (circa 2009) conference and was started by Edward Roske. ODTUG‘ers play the Ultimate Werewolf edition. The game is formally played several times a week, starts at night, and goes into the early morning hours for the hardcore players. Scot got involved with this conference game early on and was even asked to be the Werewolf chairman at the San Antonio conference (2012). Scot’s been pretty impressed with the growth of this gamer group. KScope11 was the high point for attendance (so far), but interest has continued over the years. At KScope15 the party was so large that they had to split the crowd into two distinct groups.

What’s the Story with Scot and Magic: The Gathering?

There is one more piece to this puzzle called Scot. And this is where Scot hedges his bets for his personal gaming future. Magic is a very special game for many folks across the world. Although flavored as a role-playing fantasy game like Dungeons & Dragons, it’s actually a complicated strategy card trading game. It requires much skill, study, and experience to become Master level. 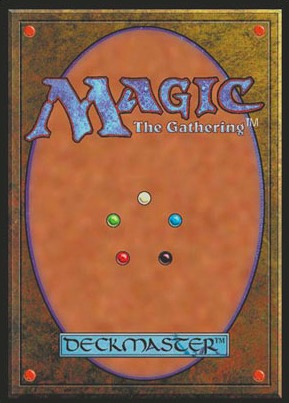 Scot first got started with Magic in college. He played with his college buddies and fellow gaming enthusiasts at local game shops. He went on hiatus for a time when he got into other tabletop games, but he’s always managed to find his way back.

In 1996, he was playing Magic at a lot of local gaming shops. He was winning, too. Around that time, Wizards of the Coast started an international player ranking system for the game. They ranked him #27 in the world. He was invited to play on the Magic Professional Tour (which is a tournament that still continues to this day). In 1996, he finished in either 22nd or 23rd place (his memory is a bit fuzzy here) and won $1500. He was also invited to the subsequent tournament. Unfortunately, he didn’t do as well in that one, but he continued playing. He played the Nationals in 1997. And in 1998, he qualified for a 3rd Pro Tour. Scot stepped away from the game in the early aughts, but has since started playing again at a lower level competition. He would like to get back into Magic in a serious way.

Gaming is a natural segue for those in the technology industry. As Scot advises, “there are a lot of transferrable skills from programing to gaming”.

If you’re new and would like to pick up a fun, mentally challenging, and geek-awesome hobby, then read on! 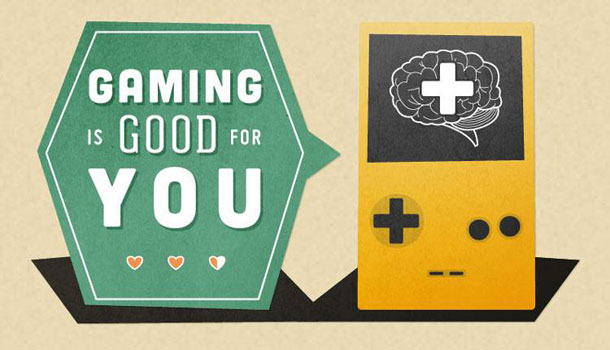 (courtesy of the Entertainment Software Association)

When asked what Scot’s favorite all-time games were, he listed the following:

The games he considers to be his “go-to” games:

Gateway games for those who are interested in taking their simple tabletop skills (Chutes & Ladders) to the next level or branch out to Eurogames:

In addition, if you’re new to a game and don’t know how to play, here’s some advice on how to get started:

Game on, my friends!

One thought on “ODTUG Member Series: The Gamer”