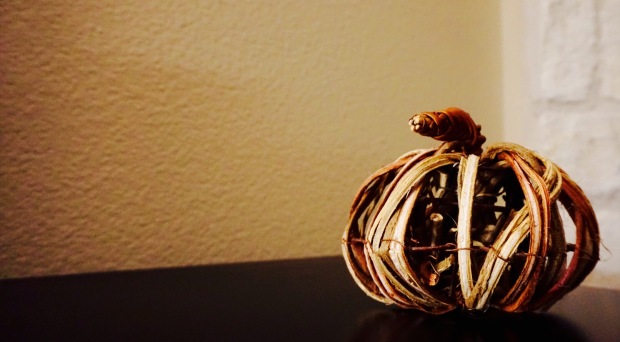 Last weekend marked the first day of October. Fall is really starting to come into Texas. The sunsets are getting longer and we have a much needed break in the heat. And with the start of October this year arrives the annual Texas State Fair. The State Fair, our foodie temptress, came beckoning her fried song. You had me at fried, my friend. No invitation necessary.

The Texas State Fair is a huge attraction regionally and has been around for 130 years now. People come from all over the state (and even neighboring states) to try the fare, as well as attend one of the major events (football games, concerts, etc.). This year’s musical headliner is Nelly.

The State Fair only runs for 4 short weeks, but it’s a big business. Look at the numbers:

However, most people are attracted by the food. Each year the Texas State Fair debuts new food, mostly fried. Entrants are tested and the top winners are crowned. The 2016 Big Tex Choice Award winners include “Fried Jell-O” and “State Fair Cookie Fries”. I was totally digging the Jell-O.

This year my husband, sister, and my sister’s friend all trekked together to the Fair. After some adjustments in our friend’s wardrobe for Halloween, off we went.

After taking nearly 2 hours to get into the fair (drive time + parking time + ticket line time), we made a beeline to the food. First stop: Fried Jell-O. 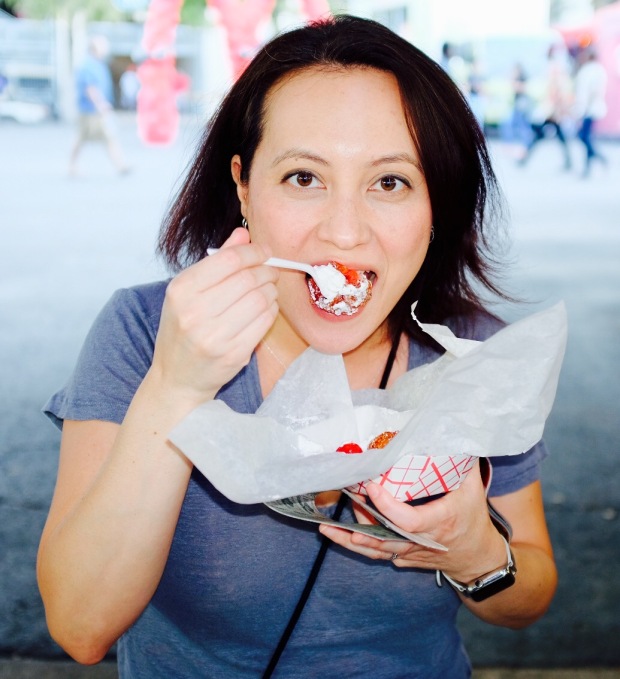 The Fried Jell-O did look like the picture, but perhaps with a little less goo. In a nutshell, this dish is a fried dough ball with solid Jell-O in the middle (which melts slightly due to the fryer heat). Everyone in our group tried it, but I have to say we were disappointed. First, it cost 16 coupons ($8) and you got 2 total fried dough balls. There was not enough Jell-O in the first dough ball and the overall flavor was underwhelming.

Next stop: Fried PB&J (peanut butter & jelly). This is one of my husband’s favorites. It was every bit as good as the last time he had it. 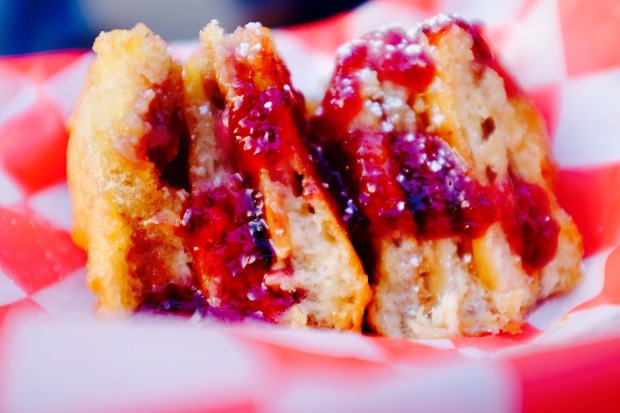 Then it was time to switch over to some savory eats. A 2016 finalist (but not winner) was the “Southern Fried Chicken & Dumplings”. This is exactly what it sounds like, but somewhat deconstructed. The chicken was separated from the dumplings in a pile of fry. It was served with a side of chicken sage dressing.

I did not care much for the dumplings (believe it or not, they are not as good when fried), but the chicken was the best thing I ate all night!

My husband grabbed the “Bacon Cheddar Ranch Fries”. In a nutshell, this dish is a basket of french fries that bacon, cheddar (the gooey kind), and ranch exploded all over. 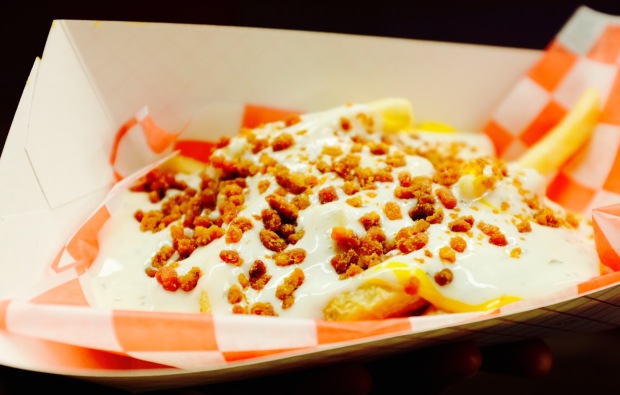 I was not into it, but I don’t love ranch as much as he does. I felt like it was drenched in ranch, the fries a bit too soggy.

We then took a tour of some the animals. The State Fair showcases not only food, but farm animals, live stock, arts and crafts, and wares. The little (and ginormous) critters are cute. 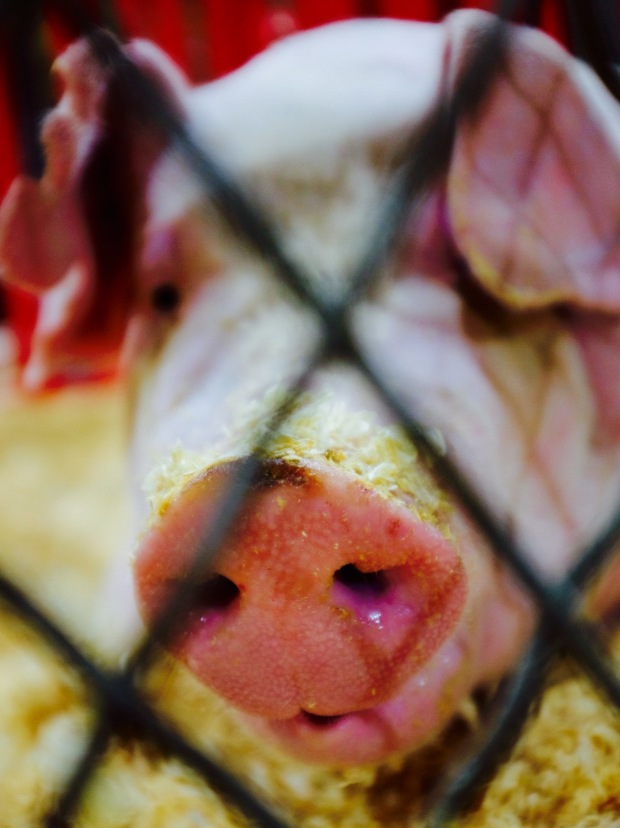 Then we looked through one of the large buildings of wares. In addition to sampling the food, we got a lesson in honey bee cultivation. Local Texas honey is a good industry here. Texas is so spread out that bees can live in protected areas for many generations. I got to see a live queen bee too. 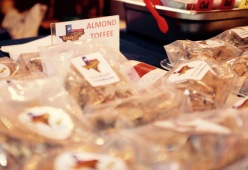 The wares continue to become more and more interesting each year. 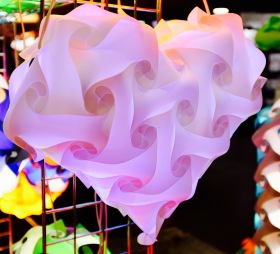 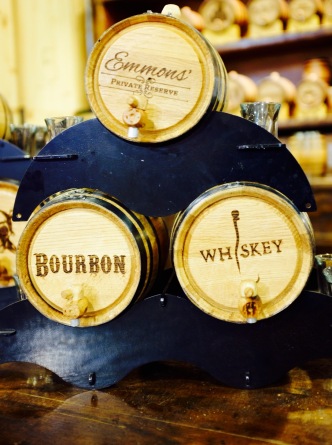 We also stopped to marvel at Big Tex. Big Tex is one of the world’s largest mechanical dolls.

Some people think he’s freaky. I think he’s awesome. Apparently, I’m not the only one who likes him.

One of the things I noticed this year is that the number of beer gardens continues to grow. It looks like they’ve added 1 or 2 new ones. Although I’m not a beer drinker, even I notice when they change their beer culture. I now see trendy, lit areas that remind me of central Texas culture – Austin-ish type pop-ups that are roped off with a variety of commercial and craft beers. The State Fair also increased its quality of spirits – more wine and interesting cocktails have been added to the menu.

While we were pausing our food gluttony, we caught the nightly parade. This is a show of musicians, floats, and beauty pageant winners, in addition to some special local celebrities. It lasts about 10 minutes and circles the fairgrounds. 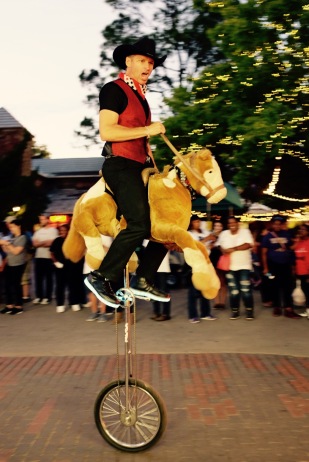 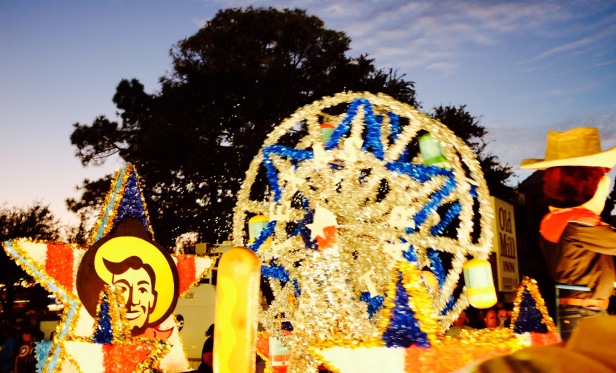 We also caught a glimpse of the crafts. Crafters can rake in awards. Each entry is judged and the best ones are proudly shown. One of the main attractions within the crafts area is the State Fair butter sculpture. Over 1,000 pounds of butter are “carved” to make a life-sized art display. I have no idea what penguins and cows have to do with each other, but the whimsy of it all is part of the Fair culture.

As we circled the last half of the fairgrounds (and boogied to a live Prince tribute), we started eating again. Next up was the soft serve chocolate-vanilla swirl for my sister and her friend.

Then we hit up the fairway of games. If you so choose, you can pay way too much money to play the carnival games and win prizes that are worth a fraction of what you paid. Pretty much every type of carnival game is there. Some of the prizes this year are amusing. 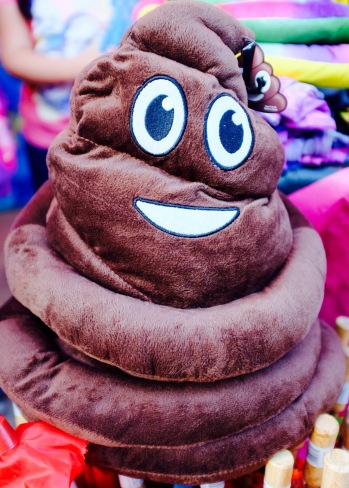 There are also a number of rides, including the famous Texas State Fair ferris wheel.

Then I hit up the next new food on my list, “Edible Cola”. This is a soda of your choice served in an edible glass. Being the candyoholic that I am, I chose the Red Candy Apple flavor.

The container is a bendable cup that is thick enough to hold soda for a long time without wilting or disintegrating. The cup flavor did significantly change the soda flavor, though – I only tasted apples.

The above is the before picture. Below is the after. I could not resist trying the edible glass. Although it was super chewy and only hinted at true candy apple flavor, we ate every last bit of it. 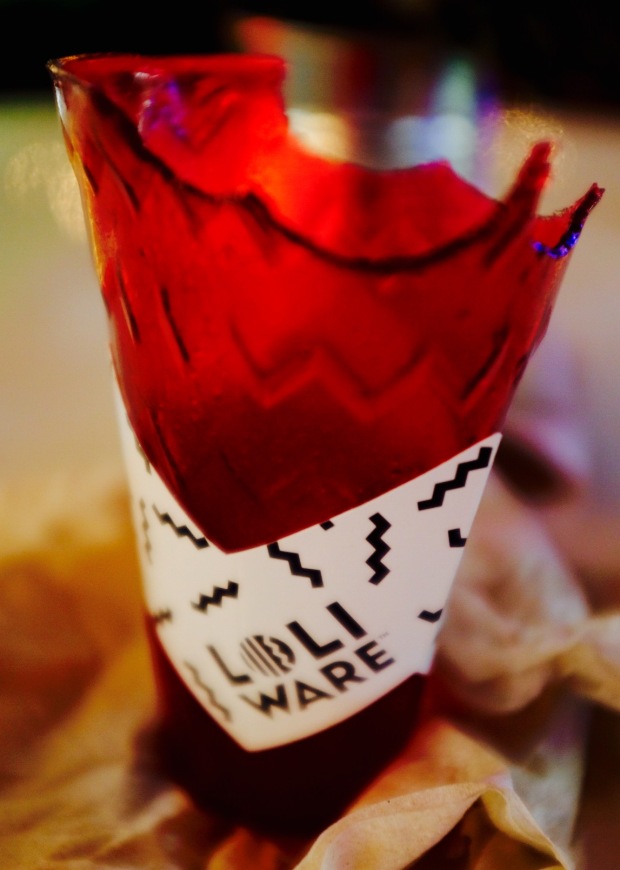 We continued down the path and I caved and decided to get something “real” to eat. So I ordered a plate of ground ribeye sliders. Although it was a 20 minute wait for them, it was nice to eat a true meal that wasn’t fried. 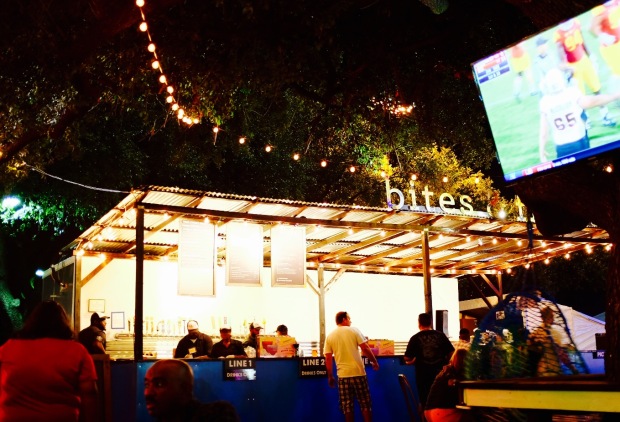 My sister and her friend accompanied us and grabbed some flavored margaritas which they enjoyed immensely. 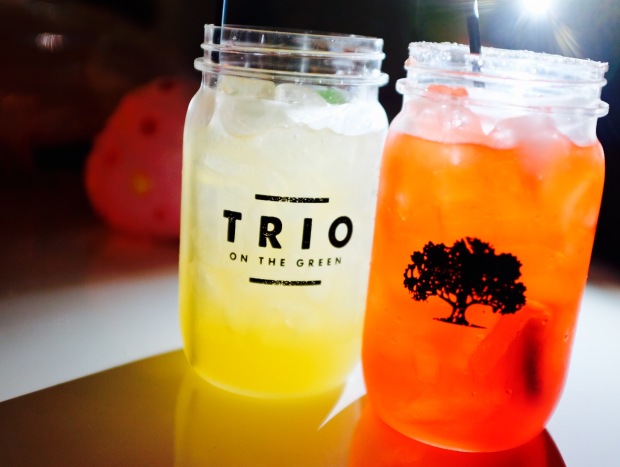 On our last leg of the fairgrounds (we basically walked one gigantic circle around the map), we took stock of our leftover food coupons and decided to be more strategic. I knew how I was going to end my night (I get the same last food item every year), so I grabbed a dish that’s been around that I have not yet tried: “Deep Fried Reese’s & Cream”. 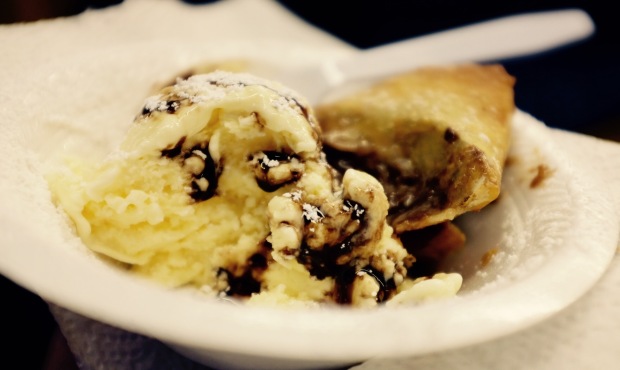 It was yummy, but not worth the price. You get one deep fried peanut butter cup and a scoop of vanilla ice cream for 14 ($7) coupons. I’ve never had it before, however, so I enjoyed the experience.

Finally, to round out my night, I went in search of my final dish. It happened to be at the most popular funnel cake stand, so I first took some pictures of the funnel cake madness behind the scenes. Note that the Fair workers work long hours and very hard each day. They make a good buck, but I don’t envy their role. Funnel cakes take awhile to make, so imagine dealing with hangry customers all day long. 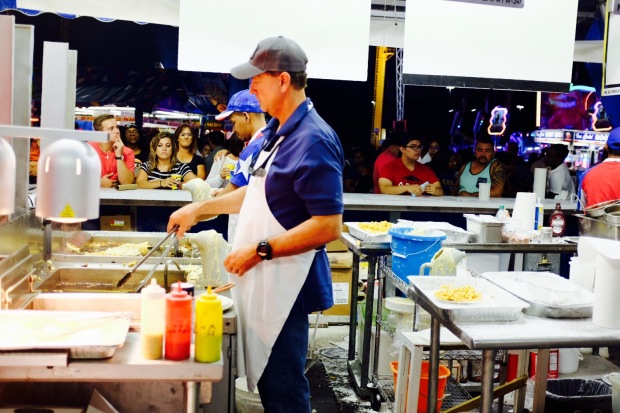 And for my final pit stop, I found my beloved “Caramel Apple Wedges”. I like to call this dish “healthy”.

So that was the 2016 Texas State Fair adventure. Again, the fried chicken in the “Southern Fried Chicken & Dumplings” was the standout new item for me. I have to say, though, our usual staples of Fried Butter and Fried Coke were missing this year. I guess they’ve retired, as dishes do after a number of years.

So how did we do on costs this year? For two people, a tad bit more than last year’s $70 price tag:

I don’t know if I’ll always live in Texas, but my heart will always belong to Texas and its amazing State Fair.