This year I was fortunate to be accepted as a speaker for the Collaborate conference and attended for the very first time. I ended up being a primary presenter on two sessions in professional development, a co-presenter for a technical session in the EPM track, and had two Oracle Analytics Cloud (OAC) short talks. To be perfectly honest, it was a lot of work to prepare all of these sessions and I was super stressed in the days leading up to the conference. But it was all worth it in the end.

If I had to summarize my time at Collaborate, I would say it was full of good times. It’s in Las Vegas. How can you not have a good time in Vegas? I’ve been to Vegas over a half dozen times and each experience is unique and rewarding in its own way.

However, let’s handle the events chronologically.

The booths were still being built on Sunday, so I spent the day getting acquainted with the Collaborate conference and the Mandalay Bay hotel venue and preparing for my afternoon customer session. One of the interesting things about Collaborate is that it is actually three separate conferences in one. Collaborate is hosted by 3 user groups: IOUG, OAUG, and Quest. OAUG is, by far, the largest of the user groups in attendance numbers. However, all of my sessions were within the IOUG track, so that’s where I spent most of my time.

After my session, I attended a few others that I found to be super helpful. One was the new speaker orientation, which was full of nuggets of wisdom for new speakers. The other was the new attendee session. In the new attendee session we got to meet and greet with the conference committee. They are clearly a tight-knit group with many years of experience. If you are new to Collaborate next year, I highly recommend these two sessions. There are great tips for: being first-time speakers and attendees, getting around the venue, and making the most of your experience at Collaborate. 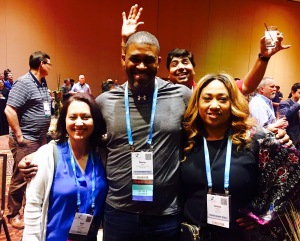 (From left to right: me, Danny Bryant, and Natalie Delemar)

Later that night, I attended the IOUG welcome reception. It was sponsored by Accenture, who is new to the Oracle user group conference sponsor scene. My buddy, Danny, gave an opening speech and we all noshed on tasty snacks, enjoyed cocktails, and networked.

Afterwards, I caught up with my buddies, Danny, Stewart Bryson, and Alfredo Abate. We wandered around Mandalay Bay and stopped by one of their live music bars to check out the rock band The Limit, an amazing rock cover band who plays songs on request. They played Kscope many years ago and they are a favorite of interRel’s as well.

Then we hit up Eye Candy, which is another open bar/dance floor somewhere in the middle of Mandalay Bay. They have great dance music around midnight. It’s funny how Vegas works – we ran into the IOUG leadership team there and danced a few songs with them. I stayed as long as I could handle on a 2-hour time change and then turned in for the night.

On Monday, the booths didn’t open until the evening so I attended sessions most of the day, as well as gave a short talk on OAC. I also went to a couple of strategic meetings for ODTUG. In addition, I caught up with some of my Oracle Product Management and user group friends.

One of the the highlights of Monday was watching the Keynote “Delivering Happiness”, by Jenn Limm. She is the CEO of the company Delivering Happiness, which she and Zappos founder Tony Hsieh co-founded. Her talk gave a unique perspective on how to measure and deliver happiness in workplace and personal environments. I enjoyed her session immensely.

At lunch, I attended the WIT (Women in Technology) luncheon, where we sat amongst ~500 attendees (mostly women), and listened to Colonel Michelle L. Hayworth discuss the challenges of cyberspace defense operations. 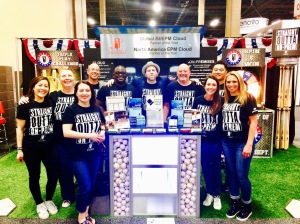 The booths opened that evening. A rush of attendees entered the large exhibition space and interRel did their thing. interRel exhibits at multiple conferences and user group events throughout the year. We enjoy Collaborate because we have the opportunity to meet customers new to the Oracle EPM/Hyperion space.

Monday night is the typical customer appreciation night and interRel held our customer event at TopGolf. I socialized with some of our customers, explained the ropes of TopGolf, and then headed out to the Oracle ACE dinner. 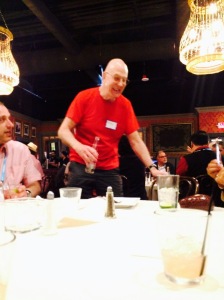 The Oracle ACE dinner at Collaborate was a memorable one for me. Not only did I get to hang out with my ACE friends, but we got super goofy that night. If you don’t believe me, just find the twitter feed.

Bryn Llewellyn kept getting up on chairs to make speeches and toasts, although he is “not good” at public speaking. He’s hilarious! Love that guy!

There were also a million pictures of our trio, as well as just Rob and Michelle. Some of their facial expressions were priceless.

It was clear that we were having way too much fun at our table. I’m pretty sure the cocktails that we were drinking were helping the festive atmosphere. Danny and I started playing a drinking game that Francis Mignault, Alfredo, and Stewart eventually joined in on. #ThingsI’mNotDoingAgain #UntilTheNextTime #OrKscope 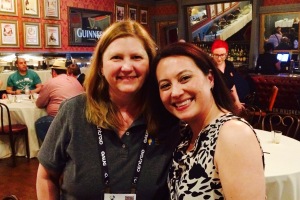 Then Jennifer surprised us all by making a few Oracle ACE promotion announcements. Myself and Deanna Sunde were recognized for moving up from Oracle ACE Associate to Oracle ACE!

Erik and Jennifer later told me that he and I were also bestowed the honor of becoming the very first Cloud Oracle ACE’s! How exciting! Cloud ACE’s are those in the ACE program who are interested in the Cloud route and have qualified with Cloud-contributing content. As I am an EPM Cloud Specialist at interRel, this is a natural fit for me.

There were other promotions announced in the past week on Twitter for those friends who were unable to join us at Collaborate. Big shout out to my fellow interRelite Robert Gideon for being promoted to Oracle ACE! Congratulations to everyone for their hard work and dedication!

Then Danny, Stewart, myself, Alfredo, Michelle, and Bobby Curtis ended up at Eye Candy again. Their music is soooooo good. We danced yet another night away…

Tuesday was pretty much all day booth duty. Unfortunately, I don’t have many pictures from this day. I did have to attend a strategic ODTUG meeting around lunchtime. I was also on the hook to present a short set of demos on OAC. It was fun watching Collaborate unfold from the exhibit hall.

At one point, Rob, Erik, and I were being silly in the IOUG lounge. Erik always brings a box of funny badge ribbons to every conference – I grabbed a few to add some “flair” to my badge. Then we all upgraded our Oracle ACE ribbons.

Later that night, I attended the OAUG EPM/Hyperion Connect networking event. There was a pretty intense game of Hungry Hungry Hippo going on (at least one picture is floating around on social media). I caught up with more of my EPM friends there.

Finally, a bunch of us ran over to a party at the House of Blues. I met some friends of Alfredo’s and Vince Tran‘s, met up with Danny, Bobby, and Lillian Buziak. We drank (yes, more drinking games), chatted it up, and danced to the live music. DSI was hosting the party and it was a grand time. Their CEO is the lead singer of the band The Conference Room Pilots – a great rock cover band!

By Wednesday, as is the usual practice at conferences, I was running on fumes. The day started with me getting up a bit later than usual and prepping for my first session of the day, a non-technical topic.

(Photo taken by my buddy, Mike Donovan, right before I was set to speak!)

Soft skills are very important to me and I love sharing the knowledge learned about how to be a better employee, team player, leader, etc.

In my first session I discussed how to be a better PowerPoint developer through the story of Star Wars: Rogue One. interRel asked everyone to wear “Talk Nerdy to Me” t-shirts that day to support my sessions!

Edward Roske (our interRel CEO), Danny, Alfredo, and a few of my friends were kind enough to attend. I then went to booth duty and Edward and I debated some of the finer points of presentation craft.

In my second session of the day, I discussed strategies for Conflict Resolution. This was my highest attended session all week. I joked to the crowd about how there were so many problems in the room…

After the booths closed down, Wednesday night began. Wednesday night was the craziest night of the week. It was insane, fun, eye opening, and full of bonding moments. I will do my best to summarize. Although…#WhatHappensInVegasStaysInVegas

First, I hung out with Danny. We had to “talk shop” (ODTUG stuff) before he started working.

Then I ran out to eat a celebratory dinner with my interRel buddies.

Upon returning to the hotel, Natalie and I said goodbye to Danny, who was jetting off to a red eye flight to his client site that night. And, still working…

Then interRel hit up The Limit. Several of my friends (Natalie, Alfredo, and Stewart), as well as some of interRel’s customers, joined us and we laughed, danced, drank, and made multiple song requests. 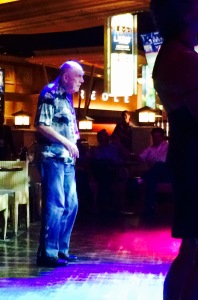 One of the memorable moments while watching The Limit was this guy. This guy easily won the night. When we first started listening to the live music, hardly anyone was dancing. But this guy, with his plastic see-through necklace of guitar picks, was up there doing his thing. Sometimes alone, sometimes with a crowd. He didn’t care what anyone else thought – he just danced and lived in the moment. Beautiful.

Afterwards, we got into the Mandalay Bay night club LIGHT. It was non-stop beats. We sat at a table, did more drinking, dancing, and chatting. Members of the IOUG leadership team ended up at LIGHT for part of the night. It got a little crazy.

Well, OK, it got a *lot* crazy. But those are the secrets that will stay in Vegas. All that matters is that everyone had a good time, there were no drunken tattoos, and Natalie and I made sure that all the ladies in the group got back safely to their rooms. 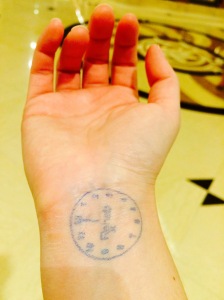 I ended the night with multiple club stamps on my wrist (all not shown). All in a conference week.

Thursday afternoon I woke up and made it to the last session slot to support my buddy, Terrance Walker, who was speaking on FCCS. Then it was final farewells and off to the airport. I was so exhausted by the time I got home, but still riding high from the excellent week.

Overall, I enjoyed my inaugural visit to Collaborate. Hope to see you there next year!