(The group photo at the end of the event!)

This past weekend I had the privilege of taking part in a serious, physically and mentally challenging obstacle course called Tough Mudder with some fellow TopDown colleagues. This was the 2015 Dallas Tough Mudder event, and it included 10+ miles of uneven terrain, 21 obstacles, and thousands of entrants. It was my very first time ever doing something like this. It was crazy. It was utterly insane. And it was one of the best times of my life.

(Finishing up Quagmire – so much mud!)

This event is run by an organization who is known for supporting the Wounded Warrior Project. From what I understand, it’s similar to a Spartan Race except that it’s not a true race. Instead, it focuses on team work and completion. The course is composed of 10-12 miles of mixed topography with obstacles every half mile or so. Each obstacle is meant to test your physical and mental strength, as well as your endurance. It’s important to note here that you are not required to do any obstacle that you’re uncomfortable with. 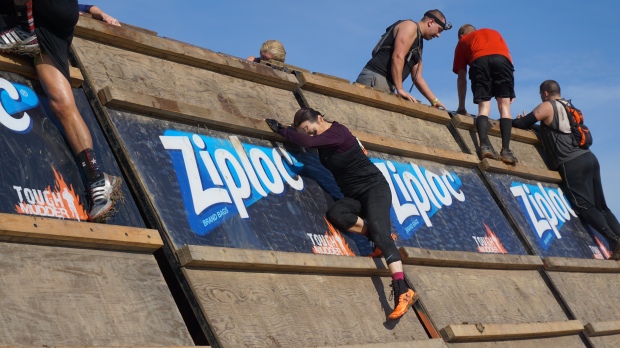 (Climbing down from Liberator)

There are many reasons why people take part in this event. Some do it to honor a fallen warrior, family member, or friend. Others do it for the camaraderie (there were a number of companies wearing branded shirts, including ourselves). Some do it for the personal satisfaction of completing the super challenging course. For me, it was a combination of camaraderie and personal satisfaction. A few champions at my firm had been rallying a group of folks to do this for almost a year. In the end five of us decided to sign up (which included 3 females and 2 males), of which 3 were locals and 2 were out-of-towners. Luckily, Steve (pictured in the middle below) had completed a Tough Mudder before and had some great advice for us newbies.

Some people who do this event find it humbling. Since I had zero expectations and figured I’d be lucky if I completed any of the obstacles, I found it empowering. I was tested in ways that I didn’t expect and I ended up surprising myself more than once on both my ability and level of courage. In addition, one of the beautiful outcomes of the event is the great bond that I now share with the group that entered together. Although we ended up splitting up due to natural differences in speed, we hung out afterwards at the site and group texted late into the night, recounting all of the pitfalls, bumps, bruises, strange tan lines and sunburns, and overall craziness. Reliving the memories of the challenges afterwards was almost just as fun as the event itself.

(After the first obstacle. Our first exposure to the mud!)

If you’re considering taking part in a Tough Mudder obstacle course for the very first time, here are some things that you might want to keep in mind.

(At the starting line! We’re excited!)

You’re a good candidate for Tough Mudder if:

You’re NOT a good candidate for Tough Mudder if:

Some of the very real fears that you may choose to face during the event: 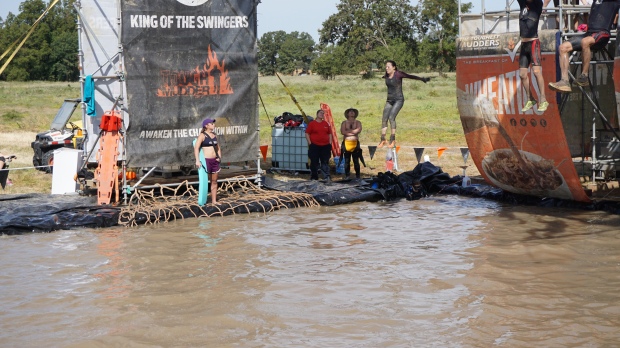 (Jumping off the ledge from the King of Swingers obstacle)

Let me pause for a moment here. Before I completely scare anyone off…of course this is a crazy event with many challenges that demands the most that you can give. But don’t take all of this real talk the wrong way and talk yourself out of a Tough Mudder if you’re seriously considering it. See those smiles on my face in these pictures? Those are genuine. I had a blast. It’s important that you understand what you’re signing up for and the tips that will help you get the most out of the experience. And just in case anyone is worried – medical staff, bathrooms, and hydration stations are available throughout the course.

(After getting out of Cry Baby – a confined gas chamber where you can’t see anything and you’re forced to inhale an intense gas. Some people threw up afterwards.)

The truth is that there is no one right way to prepare for this type of event. There are similar characteristics amongst the different methodologies: eating healthy, exercising regularly, and buying special shoes/clothing/gloves/etc. to use on the big day. As I was not in the best of health and strength when I was persuaded to join the team, I started early. I was serious about the commitment, but not as serious about the execution of the plan. (Whoops.) In fact, in the month leading up to the event, I only worked out once. This is not recommended, but it’s what happened. Sometimes life gets in the way…that didn’t stop me from following through.

Here are some of the steps that I took to prepare for this amazing event:

(The Under Armour trail runners I bought – especially made for Tough Mudder races!)

As I reflect on my still fatigued body and the super long event day (which now seems like it happened weeks ago), I think about what I’ve learned. There were some great revelations about the event itself: 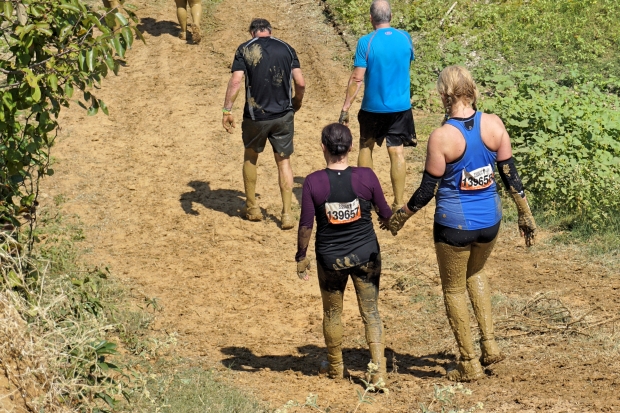 (Onto the next obstacle! See that mud handprint on my butt? LOL)

In addition, believe it or not, I learned some important life lessons. 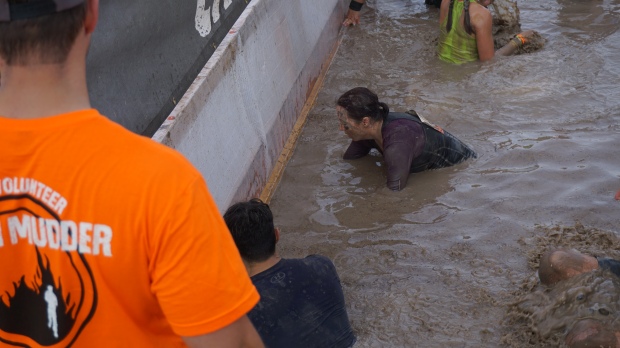 There are many obstacles. Some are super easy and some will scare the bejeezus out of you. The stand out obstacles for me personally included the following (note that the obstacle list can potentially change every year and are different by location): 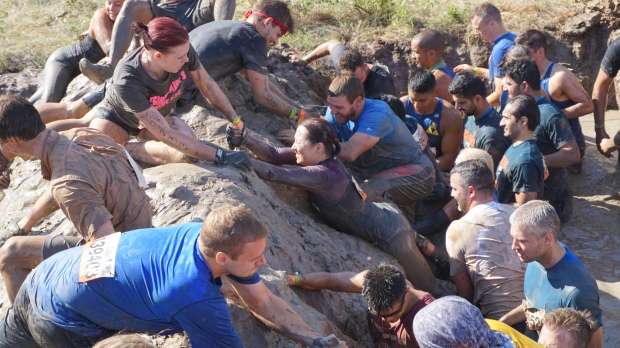 (Mud Mile. One of the brilliant aspects of the event – you can’t finish some obstacles without help!)

The culture of Tough Mudder is super unique. I haven’t been part of an event where so much focus is on teamwork. I participated in a ropes course many years ago, but that didn’t quite measure up to this. Talking with other legionnaires (repeat Mudders) and first-timers opened up my eyes to the awesomeness that is “tough muddering”.

(Swinging from the bars in Funky Monkey. I had to jump into the water – my gloves slid off the bars.)

Things that I/we actually got right this first time (thanks to the advice of past Mudders):

(Me and my Tough Mudder buddy, Jody)

Things that I would do differently if I ever did this again:

So how did I do? In the end, there were 20 potential obstacle courses for a newbie like myself (1 was legionnaire only). I finished 16.5 of them. There were 2.5 that I didn’t even attempt (especially after my knee gave out), and there was 1 that I tried and gave up on. I have no idea how these stats compare to other newbie Tough Mudders, and the truth is that I don’t care. I’m proud of myself and everyone else in the group and I feel amazing.

In the end, I was exhausted, hurting, scratched, bruised, sunburnt, ravenous, and thirsty. As soon as I got home, I took a long hot shower then soaked in an Epsom salt bubble bath. Then I ate like a pig, downed some ibuprofen, drank a half gallon of water, and took a nap. I had trouble moving the rest of the weekend. Luckily, one of my friends had given me a heads up on how this would go and I had planned for it.

(There were a couple of times when I wasn’t sure if I was going to make it all the way through.)

This was an eye-opening experience for me. I remembered a few things about myself that I had forgotten and/or given up on. This was a once in a lifetime event that will stay with me forever.

At this point, I’m still not sure if I would do it again in the future. Let me make sure that I haven’t caught a serious infection first…

So…now knowing what I know…if I had the choice to go back and do it all over again would I? Absolutely. 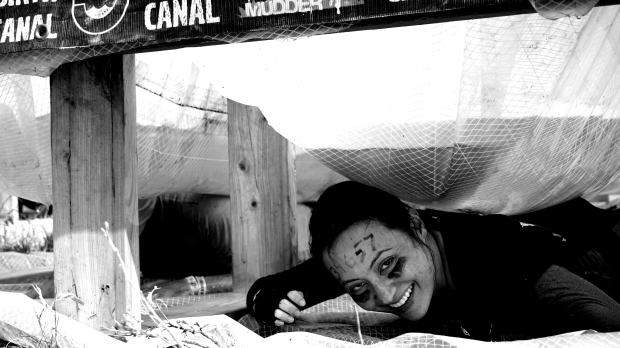