Although a good number of us Oracle OpenWorld 2016 (OOW) attendees are still recovering from the madness last week, it’s time to get back to work. The OOW attendance figures are flying in and some are very interesting.

It’s time to have another conversation about FCCS (Financial Consolidation & Close Cloud Service). This budding Oracle EPM Cloud consolidations & close solution made big waves at OOW. One of the fixtures in the Oracle world for FCCS, Rich Wilkie, gave me permission to share his attendance metrics (which he’s super excited about):

There has been much buzz about this product both before it was released and after. I have many theories as to why this might be:

Regardless of the reason, it’s clear that this cloud-based solution is on the rise. My company has received questions from existing on-prem customers about how to move off of HFM and onto FCCS. We also receive a ton of questions regarding the differences in features between the two technologies, although they are very different technically. In addition, there is a lot of interest from smaller customers who have no formal consolidations tool (or a sub par product).

What I do know and can share vaguely about FCCS is the following:

In addition, here’s a preview of a detailed FCCS vs. HFM features comparison matrix that I’ve been working on with other consolidations experts at interRel. 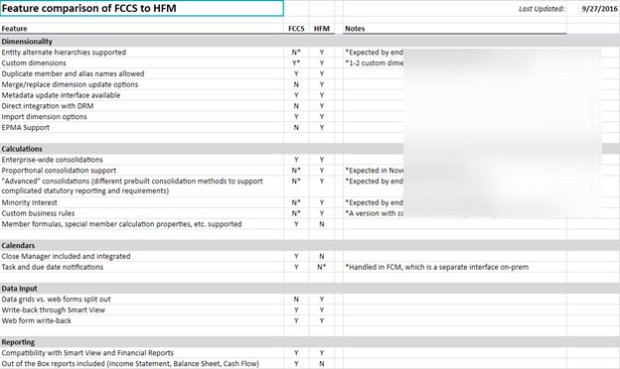 More will be revealed as we continue to sharpen our skills (and we secure permission to share some of the expected #SafeHarbor dates). We hope to release this information in a future webinar/blog post.

So what does the future hold for FCCS? As the horizon continues to point to full parity between HFM and FCCS and the successful Go Lives go viral, the future for FCCS looks bright, my friends.